Can You ‘Escape the Classroom’? 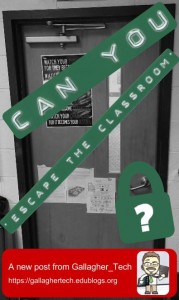 Recently, the teacher resource specialists for technology team, which I am a part of, used one of our days off to go and take the challenge of an escape room. If you haven’t had the chance to try it yet, you must! We chose a themed room of a bank heist. We had a blast, with eight minutes to spare (of an hour) we figured out the last puzzle and escaped the vault with the diamond in hand. [picture of our victory below]

A couple days after escaping, I went through my blog feed and read a post from Mr. Kaegi, ‘How to Get Out of Our Room‘. Let me tell you, in addition to a great description of what the students did in his classroom (w/ C.C. Standards listed), he also includes video from the perspectives of the students. He has a rigging system which straps a camera to the head of a student so you see what they see, pretty cool.

This had me thinking… ThingLink released a new feature, 360°/VR. This allows a  premium teacher account to upload a 360° photo and then tag it up. Why not create a virtual escape room at school? I used an app 360 Panorama to take a photo of a classroom. This was uploaded to ThingLink and then tagged. I used Google Forms with data validation and an add-on, formMule, for Sheets to act as locks. The submission response from the Form as well as the add-on (sends out emails) with more clues to the next lock and even the final lock. As clues for each mini puzzle, I included images, websites, videos, etc. A Google Doc is also included for taking notes/typing useful information. Background music also adds a sense of urgency. This was just an initial design, I would love to figure out how to have a countdown timer embedded on the image that displays how much time is remaining.

***UPDATE*** I went back after receiving some feedback from educators on the Breakout EDU Facebook group. I added a “directional lock” just prior to the final lock as one last challenge just before escaping. Then someone asked about hints… So I created a Google Form which can only be submitted once, the question asks which lock you are having trouble with; each answer choice takes you to a different section with an image clue.

Take a look and try to ‘Escape the Classroom’! I would love feedback, so let me know your ideas/suggestions in the comments below.

***Update (Sept. 2020): I recently changed school districts and many of my Google files were lost. Unfortunately, that means the Forms & Docs used in this breakout are gone.***

← Tomorrow’s Classrooms Today
My Opportunity as a Webinar Panelist →